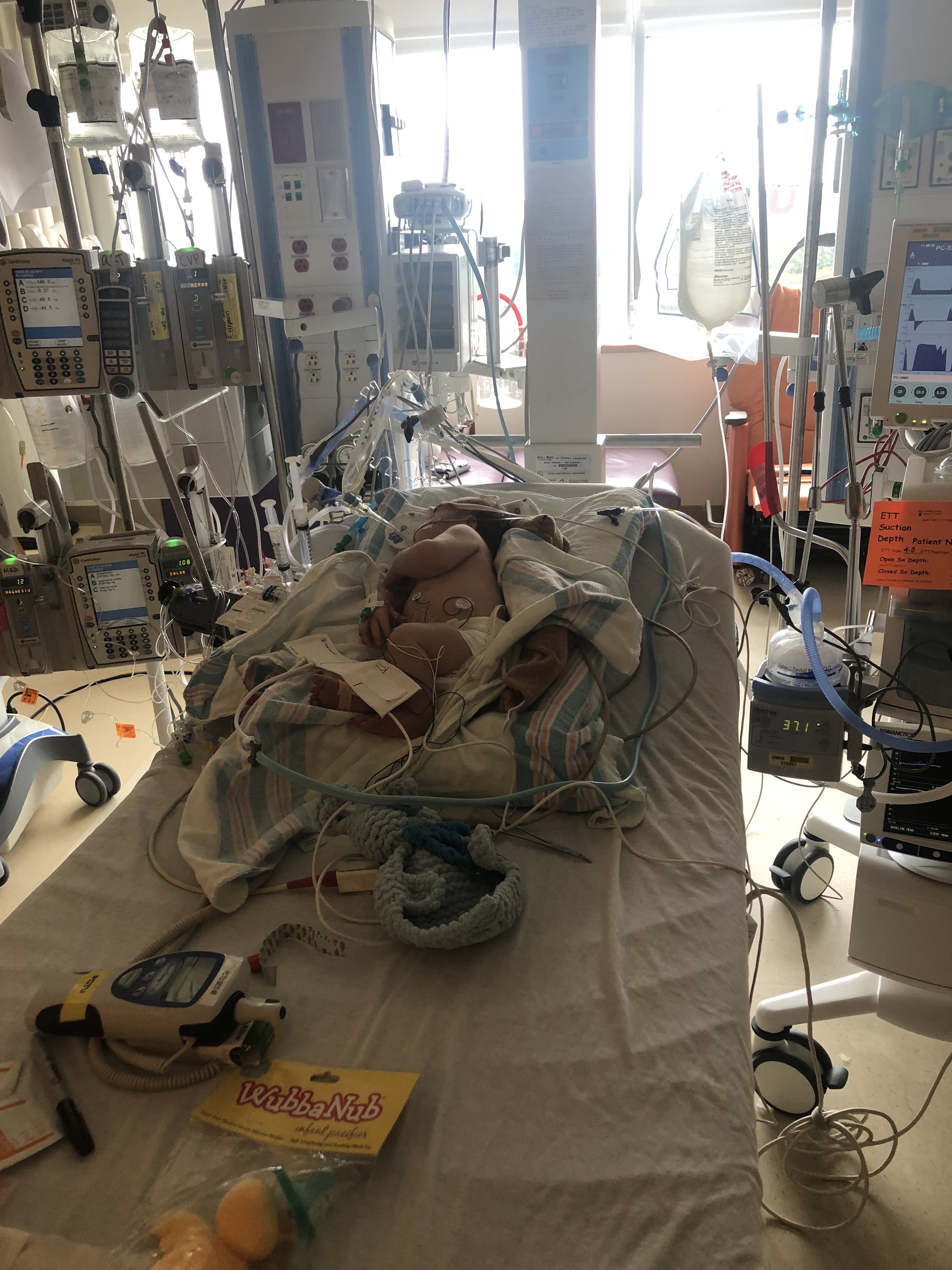 Writing out Truett’s story has been the hardest thing I’ve done in recent months. I look back at these photos and find it both incredibly therapeutic and helpful to process and entirely traumatic at the same time. While we were in these days I was so focused on being strong for Truett and surviving that I didn’t have time to actually FEEL the feelings associated with what I was going through. So, it’s taken me a little time to get to part 2 because writing part 1 took so much out of me. Here we go!

Once we made the decision to send Truett to Ann Arbor we were told it might be more complicated than simply making the decision. Our cardiologist informed us she would make a call to see if they had availability to take Truett. She said they were frequently full and we would be subject to an available bed. I hadn’t event considered the possibility that he might not be able to go where we wanted to send him.

When we returned with our cardiologist to Truett’s room in the NICU, we were told that the prostaglandin was working, but only very marginally. It was enough to keep his PDA open for some blood flow to continue through his body but not what they would have wanted or expected. At a follow-up appointment, our cardiologst told me she had never in her 25 years of practicing medicine used that high of a dose of prostaglandin in a baby. Basically, Truett’s PDA was not opening well and he was continuing to deteriorate as time went on.

As we waited for calls to be made, I sat by Truett’s bedside and prayed some of the most earnest prayers I’ve ever prayed. I could tell that the medical staff was worried about Truett – about the possibility of damage to his heart and lower extremities if they couldn’t regulate blood flow, and potentially a threat to his very life. For me, the scariest part was that there was nothing Sioux Falls could do beyond what they were already doing to keep Truett alive. They didn’t have the ability to perform the surgery he so desperately needed. We needed to get Truett to Ann Arbor. Please, Lord, I prayed. Please make room for Truett in Ann Arbor.

We finally got confirmation that they did, indeed, have an opening for Truett. However, they warned us that we shouldn’t get our hopes up because by the time the paperwork processed the bed could be taken by another child. We were later told by the nurses at Mott that they had been at capacity for MONTHS and had literally discharged a couple patients the morning before Truett arrived, making space for him. It felt like an eternity waiting for the paperwork to process, and once it did I felt such a flood of relief. But the relief was short-lived when the flight crew told us that bad weather was coming in and we might not be able to take off in the medical airplane.

I’ve said this before and I will say it again, this was the single most amazing experience of my life – I literally felt that every step of the way God was walking ahead of us, pushing doors open that could have very well be closed to us. In my emotional haze, I remember just repeating over and over again, “Lord, please hold the weather off. Please let our airplane take off. Please get us to Michigan.”

The team worked quickly yet carefully to start the process of getting Truett ready for transport. At this point he had gone from being hooked up to a small amount of oxygen to being hooked up to so many different machines and medications and monitors. He also got intubated because the high dose of prostaglandin frequently caused apnea. While the crew was working as quickly as they could, the process of getting him transferred over to the transport machines took what felt like forever when we were working on a timeline.

The team informed us that only one parent would be able to travel with Truett in the airplane. We decided I would travel with Truett and Joe would take a commercial flight the next morning. When I tell you my husband is the strongest man I know, I’m not lying; Watching him say goodbye to Truett that night in the hospital in Sioux Falls was one of the single most heartbreaking moments of the entire experience. We both knew what one another was thinking – that this could be the last time Joe saw Truett alive – and yet neither of us gave voice to those thoughts. Joe took off around 10 pm to check into a hotel and try and get a few hours of sleep while I stayed with the team preparing Truett for transport. It took another 2 hours before we were actually ready to take off – and I was nearly crawling out of my skin doing everything I could to avoid shouting “Get him on that damn airplane NOW.” I felt so helpless and desperate to get to Michigan. While they were preparing him for transport, our neonatologist asked us if me if I would like someone to come baptize our son. Hearing someone give voice to what I knew to be true – that he could very well not survive this flight – took my breath away. I didn’t know what to say, so I simply blurted out, “We believe in adult baptism!” (Looking back, I can get a good chuckle out of my response. 😉 )

Around midnight we made the walk to the ambulance, then an ambulance ride through the quiet streets of Sioux Falls and to a waiting airplane. We traveled with a nurse practitioner, nurse, and respiratory therapist to Ann Arbor. I was informed that if Truett crashed while we were in transport that I needed to make sure to maintain. my distance to make sure the team had adequate space to work.

The 2 1/2 hour flight was the longest flight of my life. The transport team all had on headphones to communicate and coordinate care for Truett while in the air, so I was left to the quiet isolation of my thoughts, fears and prayers while we made our way to Ann Arbor. I could see them tweaking things and opening and closing the little box my sweet baby was confined in but had no idea if he was stable or not. I watched faces for signs that something was wrong and tried desperately to sleep to no avail. Pumping on a medical airplane may now go down as the most outrageous and over-the-top place I’ve pumped. Through the whole experience, pumping was a saving grace to me because it felt like some tiny, tangible thing I could do for Truett when I could do nothing else.

When we landed, around 3 am, I felt such a huge flood of relief wash over me. We were in Michigan. We were so close to Mott Children’s Hospital and the team who would be able to repair his aorta and give him the life saving care he so desperately needed.

It’s funny to think about the things I remember. Like our overly chatty ambulance driver who talked my ear off about Florida Gators football (he was a Gators fan, which to me felt like God’s little wink to me in a very dark time) and all the places I should try to visit while in Ann Arbor (um, thanks buddy but we didn’t have a lot of free time.) We arrived at Mott around 3:30 am and made our way up to the 11th floor – the PCTU – which is an intensive care unit specifically for cardio patients. The photo above is what our sweet baby looked like after they transferred him to his bed at Mott. Swollen, sedated, panting like a dog, fighting like the little warrior that he is to stay with us.

We had made it to the place that would perform Truett’s surgery. As they transferred him over to their machines and got the report from the transfer team, I felt my body begin to shake uncontrollably. My teeth were chattering and I was shivering. I think the adrenaline and lack of sleep had finally started to get to me when I was able to let my guard down a bit. The team of nurses wrapped me in warm blankets and brought me to an orange chair situated behind Truett’s bed in the PCTU bay where he was situated and for the first time in nearly 36 hours I fell asleep.