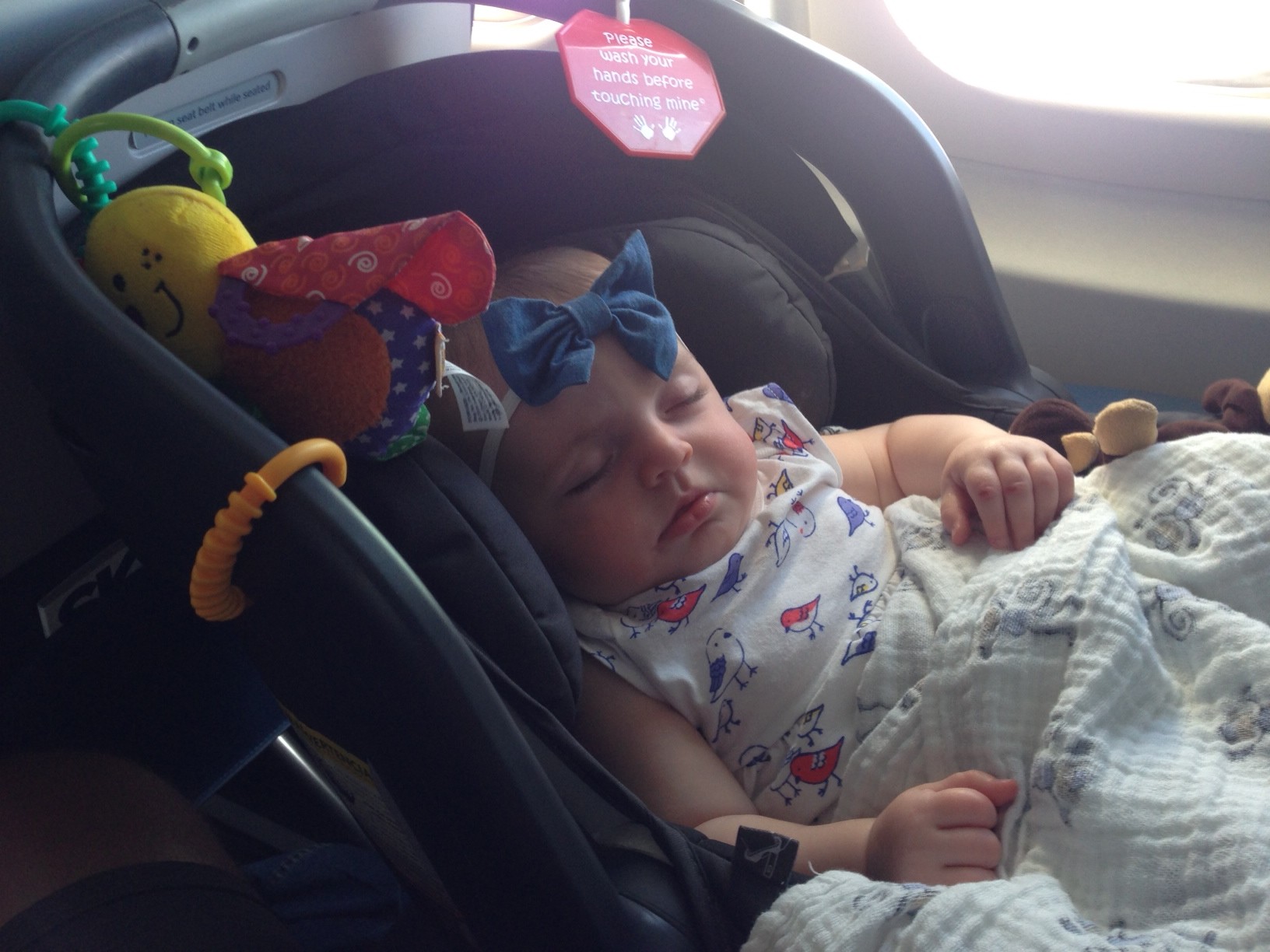 We just returned from our first long vacation with Ainsley; in fact, we were gone for 10 days, the longest trip we’ve taken since our travels to Italy! I was more than a little nervous to be traveling with a baby, especially since our trip included a flight to Boise, a 2+ hour drive through the mountains of Idaho, and a couple different places to rest our head over the course of the trip. I researched about flying with a little one and how to adapt and adjust along the way, and our travels were really successful! Here are a few things I learned along the way…

1. Be flexible when possible.
I went into our trip with the mentality that I was going to have to be more flexible than normal. Ainsley typically sticks to a pretty routine schedule during her days and goes to bed around 7 each night, but transitioning to a different time zone and spending time with family, I knew that it wasn’t going to be entirely possible to stick to our regular sleep schedule.

Instead of stressing about the whole thing, I decided to try and go with the flow as much as possible, within limits. Ainsley added a cat nap into her night time routine and went to bed a bit later, around 9 pm each night, which allowed us to go out to dinner with family while still getting Ainsley to bed at a reasonable time. I was surprised at how well she did! She slept 8 or 9 hour stretches each night, probably because she was so worn out from all the new experiences, and slept in a little later than normal to compensate for the later bed times.

2. Ask for an extra airplane seat.
Our flight on the way out to Boise was totally full, so an extra seat wasn’t an option. But on the way home our flight had a number of open seats. We got to our gate a little early and asked about getting an extra seat for Ainsley so we could take her car seat on board. The gate agent moved us around to a row with an empty seat and we got to take the car seat on board. It was great having a bit more room for Ainsley to move around and nap in her car seat and it was awesome not having to worry about bothering the person next to us!

3. Feed during take-off and landing.
You’ve probably heard this one before, but we fed Ainsley during take-off and landing and we had no issues with her ears bothering her. She ate well and was such a trooper during both flights. During the second flight we had to do a little walking up and down the isles to get her to settle down and sleep, but everyone we sat near was SO friendly and the flight attendants did everything they could to make our trip as comfortable as possible.

4. Know airline policy.
Do a little research in advance so you know what you can/can’t take through security and what you’ll get charged extra for when you’re flying with a baby. Security will let you take your bottles of water for formula through security even if they are more than 3 ounces, and the same applies to breast milk without volume restrictions. You can gate-check your stroller/car seat without an additional charge, but any extra baggage will be charged the standard airline rate unless you buy a separate seat for your baby. If you’re traveling internationally, most airlines offer discounted infant and toddler tickets and, as mentioned above, if you have a plane that’s not full, check with your gate agent about getting placed in a row with an empty seat so you can take your car seat on board.

5. Keep your sleeping quarters as normal as possible.
Ainsley sleeps in a room with black out shades and a sound machine, so we wanted to keep her sleeping conditions as normal as possible. Our family had a pack and play at our destination with a bassinet so she was up higher in the pack and play, and it worked great! I also traveled with a bunch of black trash bags and masking tape in case the room was light and we needed to create a black-out shade in the rooms we were sleeping in. We didn’t end up using them, but it was nice knowing we had the option.

Additionally we traveled with Ainsley’s sound machine and used it on a portion of our travels to keep her room free of distractions. Overall we were really surprised about how adaptable Ainsley was and we realized we don’t need to be nearly as quiet as we thought we needed to be when she slept!

5. Pack to be prepared.
I’m not a big fan of over-packing, but when a baby is involved I think it’s best to have everything you might need. We took along a mini first aid kit and some baby first aid essentials, including baby Tylenol, just in case, as well as all her typical toiletries, a few toys, a couple muslin blankets, books and a number of teething toys and pacis. My goal was to have everything we needed and eliminate having to go to the store or search out a Target at the last minute. It saved us money in the long run and gave me peace of mind knowing we had everything Ainsley might need if something went wrong.

6. Bring a sling or baby carrier!
Trust me, you’ll be glad you did. Saved us a couple of times to have my Solly Baby Wrap in my purse to wrap Ainsley up and soothe her. Plus, your family or friends might have fun wearing your baby; I know my little sister did!

7. Keep calm and carry on.
Overused phrase but good advice none the less. On our way home, Ainsley had a massive blow-out in the security line at the airport; we’re talking poop dripping on the carpet in line! I took a deep breath, stepped out of line and whipped out one of our handy disposable changing pads and changed her right there in a matter of minutes. Never was I so thankful for extra zip top bags and our roll of arm and hammer disposable diaper bags to clean up a huge mess in a hurry. An added bonus? I got compliments from the TSA security man on my fast diaper-changing skills!