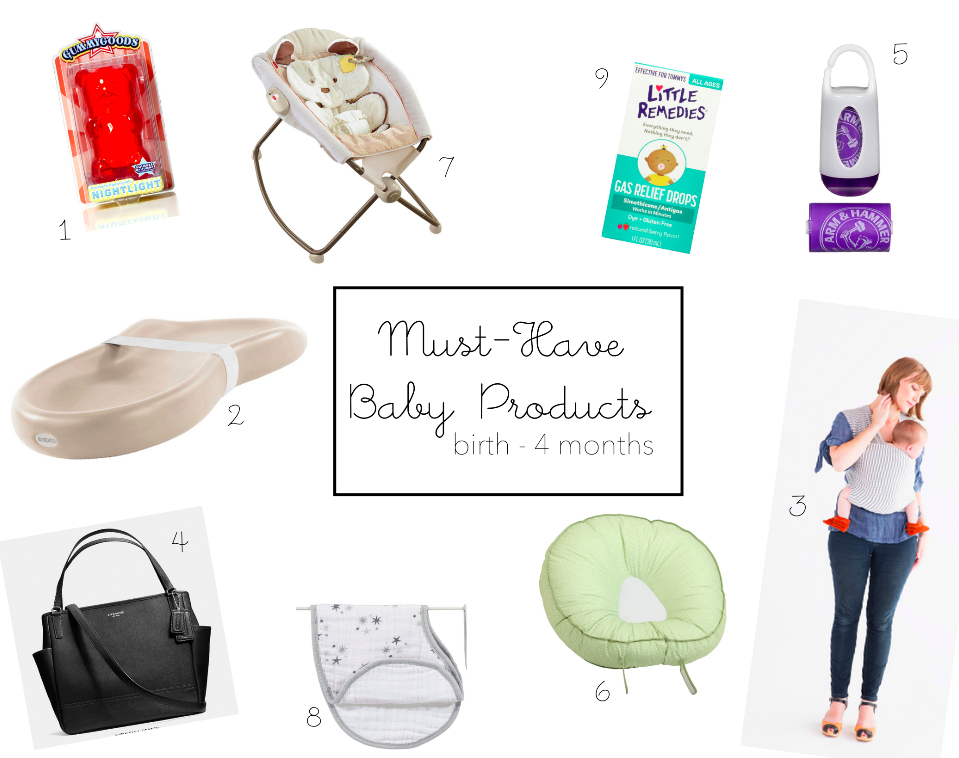 That said, I was super interested during pregnancy in what baby products were worth it and what products could be passed on. We have a small-ish house with limited storage space and no extra room for baby products that we don’t need. That said, here are the products we can’t live without!

1. Gummygoods Night Light in RED $27
I’m so thankful someone told me about this product! The first month of Ainsley’s life I would turn on her overhead light on the lowest setting (we have a dimmer) but even on that low setting, it would wake both of us up, making it difficult to get back to sleep.

The red light in this Gummygoods Night Light is less disruptive to sleep patterns and melatonin production than regular blue/white light. It’s been a total lifesaver when it comes to middle of the night feedings and diaper changes and travels well, too. I’m going to start buying these for my new momma friends as baby gifts!

2. Keekaroo Peanut Changer $99
This changing pad is more expensive than the traditional cloth-covered changing pads, but worth every single penny. I’m not sure how people use any other type! It’s made of a soft and squishy material that’s comfortable for baby, easy to wipe down (no changing pad covers needed!) and helps prevent bacterial growth. I LOVE it so much and so do Joe and Ainsley. I can’t tell you how many times Ainsley’s peed on the changer or I’ve gotten poop on it, and it’s such a timesaver to be able to use a baby wipe to clean messes up and move on with our day.

3. Solly Baby Wrap in Natural & Grey Stripe $65
As far as baby carriers go, this is a must-have for those first few months. It’s soft, stretchy and unbelievably comfortable for mom and baby; it’s great to have some additional hands-free time while your newborn naps in the wrap or wants to be close while you need to get things done around the house. Plus, it’s smaller than other carriers like the Ergo, so I never go anywhere without it tucked in my purse in case I need to soothe a fussy baby by putting her in the carrier. It also doubles as a car-seat cover, a burp rag, etc.

Now that Ainsley is getting a little bigger, she actually likes the Ergo 360 a little more. But those first few months it was all about the Solly Baby Wrap.

4. Coach Baby Bag $398
Okay, this is NOT a necessity, but hear me out: Years ago while I was in college I asked for the Coach Diaper Bag for Christmas because it happened to make a great school bag with all the pockets and straps. Now, six years later, I still have the same bag and have started to use it for it’s intended purpose – as a diaper bag! I guess my argument here is this: Buying quality is almost always worth it. I’ve gotten a ton of use out of a single bag, and now I’m using it for it’s intended purpose. It still looks great, holds up well and has tons of pockets. Plus, I feel a little more put-together with a diaper bag that looks more like a purse than a diaper bag. This isn’t the exact model I have, but it’s the newest version.

5. Munchkin Arm and Hammer Diaper Bag Dispenser and Refill Bags $8
I’m so glad I was turned on to these bags! I have the dispenser and bags in my purse at all times for diaper changes on the go and have found them invaluable for holding in the stink. Plus, it’s much more polite to throw away a dirty diaper wrapped in a stink-sealing bag that won’t make the room smell after you leave.

6. Leachco Podster Infant Lounger $47
Ainsley used this little baby lounger pillow all the time during the first few months of life. She would nap in it during the day while sitting in the sunshine (my attempt and helping her get her days and nights figured out) and it was a great, comfortable way to set her down when I needed to get something done. I can’t recommend it enough! Now that she is a bit bigger she doesn’t use it quite as much, but it expands as your baby grows to get more use out of the pillow.

8. Aden and Anais Burpy Bibs $22 for two
These are the best burp rags out there and they double as bibs with the snaps that they’re equipped with. The material is soft and absorbent and they’re large enough to clean up big messes. They’re a bit of a splurge, so I would suggest adding them to your registry!

9. Simethicone Infant Gas Drops $7
Our pediatrician recommended using simethicone for infant gas when I was worried about Ainsley’s tummy and all the gas that she was having. When your baby is crying in the middle of the night because of tummy distress, you’ll be glad you have something to give them. I started giving Ainsley a little before bed every night during a particularly fussy period of time and it seemed to help a lot! Now that her stomach and digestive system has matured, I rarely use the drops.

And, equally important, the things we purchased that I think you could do without:
1. Pack and Play: Everyone told me this was a necessity, but we disagree! We purchased a Pack and Play with the bassinet attachment and it lasted about a month in our bedroom before we packed it up and put it away. My mom owns a Pack and Play and my mother-in-law does, too, as does my family in Idaho, so we haven’t had a reason to take it with us yet! Maybe in the future we will need it, but I would hold off on buying one until you know you’ll need it!
2. Sleep contraptions: I’m going to do a whole post on this in the next couple weeks because in the last four months we’ve purchased ALL THE SWADDLES AND SLEEP PRODUCTS you can imagine. I recently loaned them out to a friend who is about to have a baby because I couldn’t imagine another person having to spend all that money just to figure out what products you baby likes and dislikes. We ended up loving two products: The Halo Sleep Swaddle (which we were given at the hospital) and Baby Merlin’s Magic Sleep Suit, but it varies so much from baby to baby that I would advise borrowing from friends if at all possible!
3. Bottles: You need these, sure, but don’t go out and buy a bunch of bottles before your baby arrives. Like sleep contraptions, bottles vary greatly and what your baby likes and doesn’t like will surprise you. We lucked out and happened to buy bottles that Ainsley loved, but we tried others after the fact and realized that she had definite preferences. Once again, borrow a few from friends to figure out what your baby likes or buy one of a few different brands before you commit to a whole set!