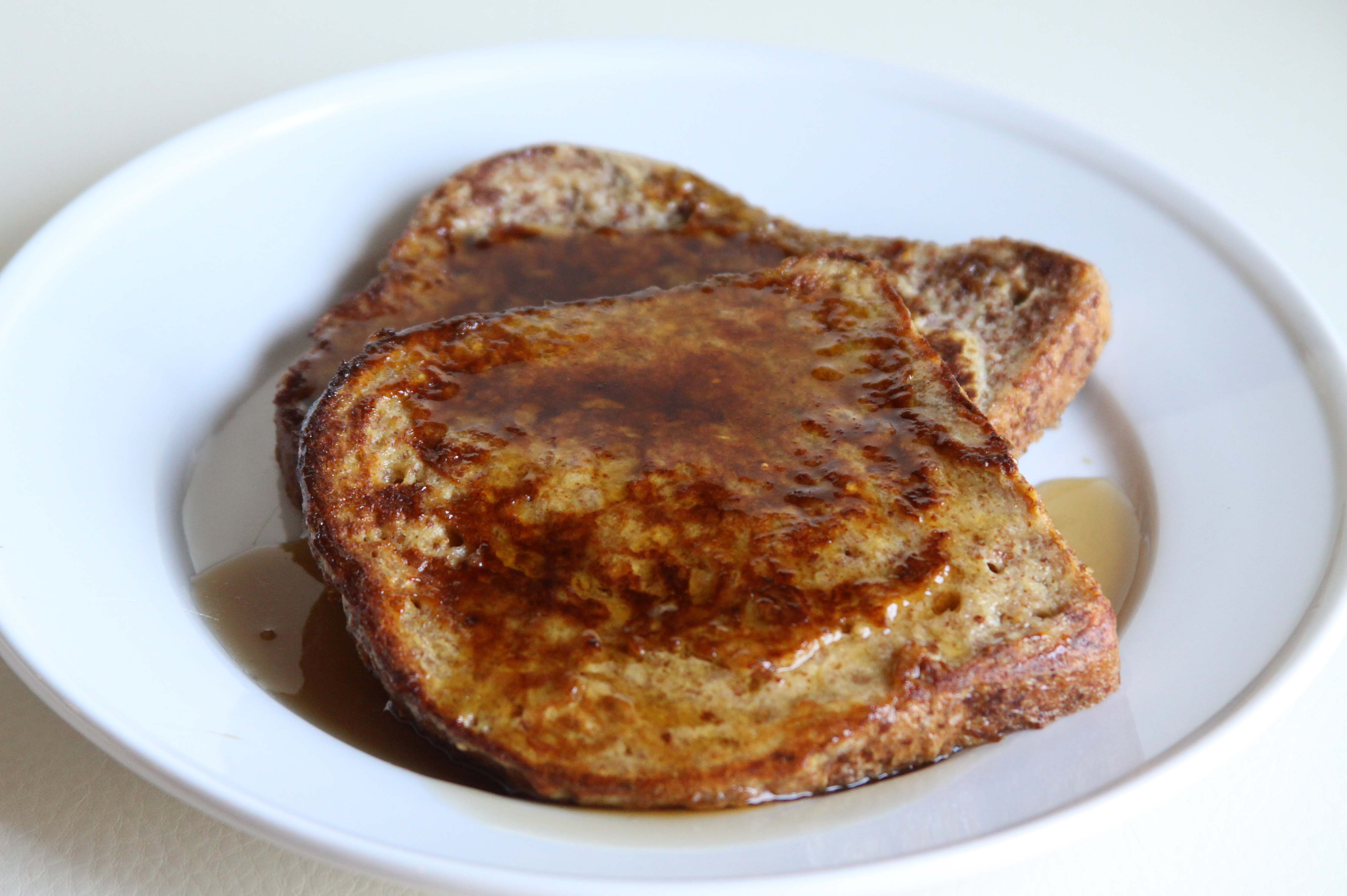 Whew! What a fun-filled weekend we had. For the past couple months, Joe has had plans for a big guys weekend with all his college buddies. There was a Warrior Dash going on this weekend near Des Moines, so all 7 of the guys spent the weekend in Grinnell. Since our apartment is pretty small, and my mom was in town for the weekend to hang out together for her birthday, we rented a nearby apartment for the guys. I prepared a bunch of food in advance and brought it over to the apartment, then left them to their own devices. Here are a few photos from our weekend: {Joe and Kurt after the Warrior Dash. It was such a hot day!} {My momma and her birthday balloons. Her birthday was last Thursday and we got to celebrate this weekend with pedicures and shopping.} {A navy BCBG jumper I came this close to buying for Jason and Ali’s rehearsal dinner this weekend. It was so comfy!} I wish I had a nice transition from guy’s weekend to French toast, but I’m not really feeling that clever. I’ve talked about my funny relationship with French toast in the past. I love the concept of French toast because it has potential to be really quite healthy: whole wheat bread, high-protein eggs, lightly spiced with cinnamon. But, sadly, most of the time French toast is nothing more than a soggy sugar bomb. For a less indulgent weekday version of French toast, I use thin slices of whole wheat bread (Trader Joe’s Complete Protein is my new favorite!), liquid egg replacement, such as Egg Beaters, and just a touch of sugar.

GIVEAWAY WINNER! The winner of the Shabby Apple Giveaway is Alisa Link. Shoot me an e-mail (madisonjanemayberry@gmail.com), Alisa, and I’ll get you in touch with the people at Shabby Apple! Instructions
*In a shallow bowl, combine the egg replacement, milk, sugar, cinnamon and vanilla extract. Dip bread slices into the egg mixture on both sides.
*In a large nonstick skillet, melt a small amount of butter. Bring to medium high heat. Cook egg coated bread slices, 2 to 3 minutes on one side. Flip and cook for 2 minutes more, or until browned on both sides. Sprinkle some of the brown sugar atop each of the bread slices. Flip the slices so the brown sugar side is down on the skillet and cook for 30 seconds more to melt the brown sugar and crisp up. Remove from heat and transfer to a plate. Serve with syrup, if desired.