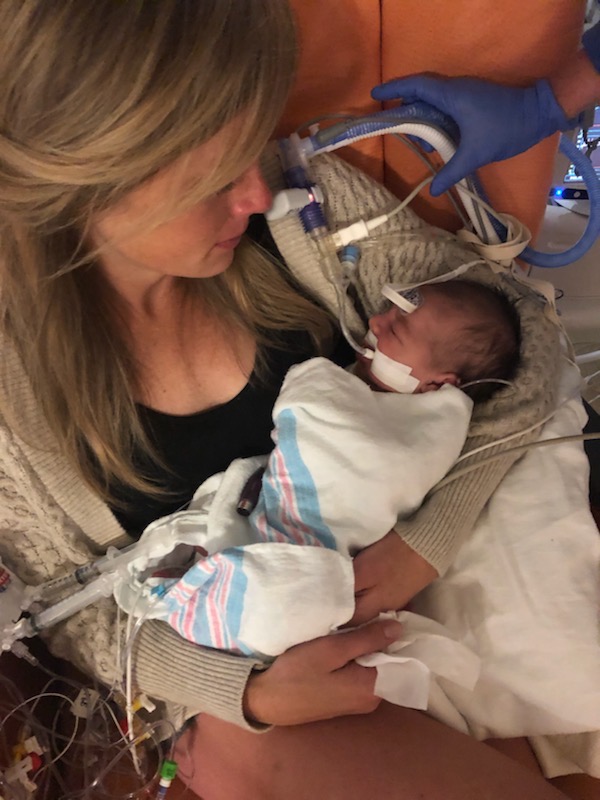 Today marks a year from Truett’s heart surgery. I don’t really know where the last year went – both the longest and shortest time – but some days when I think back, I still feel like our time in Michigan was just yesterday. Something about the one year mark feels monumental, like I’ve been marching toward this date and these memories for months and now, as I sit here today thinking back on last year, I feel ready to let a lot of those feelings and hard memories go.

Joe and I remarked often that it was so strange how we could do so little during the day and yet the days flew by at the same time. Each morning we made an attempt at showering and putting ourselves together for the day – Joe often went on a long run around the University of Michigan Campus – and I washed my hair, got dressed and put on makeup. All attempts at biding the time and helping ourselves to feel more normal I think.

Our days were a blur, sitting in the small space behind Truett’s bed in the PCTU bay and the window, waiting for Truett’s doctors and care teams to make morning rounds so we could get updated on Truett’s status, learning as much of the lingo as we could, asking our nurses 1,000 questions, and doing whatever small acts we could to make Truett feel comforted and cared for. While his status made it such that we couldn’t hold him, I spent a lot of time sitting by his bedside, stroking and holding his hand. To this day, Truett has always been comforted by me holding his hand and sometimes I think that might be why.

I had anticipated that based on Truett’s status and severe illness, that once we arrived in Michigan they would send him to surgery right away, but what I learned was that it was actually better for him to wait a number of days if possible. When Truett started to go downhill, his heart started to get taxed from the experience of working so hard to pump blood through his narrow aorta, causing a host of issues. So the care team worked hard to find the right combination of medicines (so many medications) to help keep him stable and allow his heart to rest and recover before surgery.

What I learned over the days that we waited was that the upper half of his body was getting adequate blood flow, while the lower half was not because of his coarctation. So any medication they gave him to help increase blood flow and pressures to the lower half needed to be balanced because that would push the upper half too high. Through it all, and all the medications, and all the fear we felt as parents seeing our sweet, new little baby in such a horrible state – vented and sedated, puffy from all the medications – we felt such a sense of peace and calm knowing we were in THE best hands at The University of Michigan. Every nurse, every doctor, even down to the people working at the floor desk or janitorial duties were kind and thoughtful and took time to ask how our child was doing. It’s an amazing place, that’s for sure, and one we hope to take Truett back to some day.

We got the news on Tuesday late in the day that we got bumped up to surgery on Wednesday instead of Thursday. It was a welcome relief, because during the time between our arrival and surgery, Truett was never “improving” or “getting better” – he was just not getting worse. I hadn’t been able to hold Truett since we were in Sioux Falls, but a hospital policy was that all parents be able to hold their babies before surgery. Through a lot of maneuvering through cords, a ventilator, and wires and sitting just so in a chair, Joe and I were able to hold Truett before surgery. I remember holding him and just weeping – feeling the weight of the emotions of the last three days and the fear about his surgery, knowing there was no other way forward for our sweet boy

The time between when they wheeled Truett away until we got to see him again were agonizing. I think any parent who has given their child up to a major surgery can attest to that fact. Our pastor had flown all the way from Iowa to spend time in prayer with us – truly one of the kindest and most humbling acts – and my Aunt Gwen flew in from Florida as well as my sister, Ashley, from Pennsylvania. Having them there with us in the waiting room while we waited for updates was so helpful to keep our mind off what was going on. Every hour or two a dedicated nurse would come and give us updates on how the surgery was going. I remember searching her face as she approached us each time for indications on how things were going, desperate for answers.

After six LONG hours, we got the update that his surgery was a success. Truett’s amazing surgeon, Dr. Si, came to talk with us about an hour later. He said that Truett’s narrowing was, indeed, very severe and was a “pinhole sized opening” at it’s narrowest spot. By being able to go through his back for the surgery, they were able to avoid putting him on bypass and instead – in their words they clamped the blood flow off, cut the narrowing out and “sewed really really fast” – something that to this day just astounds me.

I remember seeing Truett for the first time after surgery and my first observation was how peaceful he was. His little body was no longer struggling to breathe, no longer tense. He was steady and calm and my first thought was “He’s whole now.”

Once we were able to see Truett back in his room, the next four hours were also nerve wracking as we waited to see Truett move all four limbs to signal there wasn’t neurological/spinal cord damage. Thankfully, he came out of surgery well and the following day was doing so well he was able to be taken off his ventilator, making it possible for us to hold him for longer periods of time – something you can bet I took full advantage of. I think I spent most of that first day of him off the ventilator just snuggling him and marveling at his sweet face and refusing to move even when my arms were so numb I thought they were going to fall off. Nothing else mattered in those moments beside holding my sweet boy.

The days following surgery went by much faster than those leading up to surgery. Two days after surgery, Truett was doing so well that he got moved to the step-down floor, a floor with much much less intensive care that meant Joe and I had a lot more to do than before! We learned about how to give Truett a bath with his incision – still a very strange way to give a baby a bath – and our biggest hurdle was figuring out feedings since Truett had gone nearly a week without traditional food.

I was so thankful for some sweet momma friends that I got connected with who had babies who experienced the same journey and were able to encourage me to advocate for myself + Truett and our hope to continue breastfeeding as we worked toward more normal feeds. Once Truett woke up a bit more post surgery, it was clear that he was MAD about wanting to eat. Sweet boy always has been hungry! 😉

While our well-intentioned nutritionist came in with a plan to fortify breastmilk and bottle feed to get Truett the calories he needed post surgery, I was thankful for a nurse practitioner who helped advocate for what we both agreed was best – that Truett just needed to resume normal breastfeeding if possible. There were a good handful of difficult feedings and tears along the way, but we kept at it and he quickly figured it out.

A mere FIVE days after heart surgery, Truett was discharged to go home. Our days in Michigan have forever changed our family and had the biggest impact on me. While our return to home was really only the beginning of my own journey over the last year – one filled with lots of residual effects of trauma and plenty to process and heal from – Joe and I will forever hold those days in Michigan close to our heart. It was a time where we saw God walk alongside us in a thousand different ways and where we surrendered any illusion we had of control over our children’s lives.

A big thank you to YOU all who also walked alongside us as we processed and worked through the last year. Thank you for praying with us and for us, for allowing me my own space and time to process and for loving our sweet Truett and celebrating his milestones along with us.