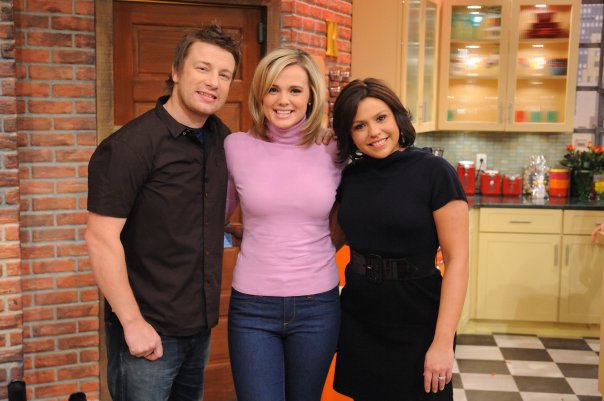 I know it’s not quite yet Tuesday, but I’m a bit anxious and nervous to share this post, so I’m posting early, if that makes any sense. I’ve been trying to find the right words for quite some time, struggling on where to start and how to share my No Fat Talk story in a way that’s both raw and uplifting. Other than my mom, Joe and a small handful of friends, I’ve kept my story to myself. Not because I am ashamed anymore (though I certainly used to be) but because it’s not exactly something you go around talking about in casual conversation. But as time has passed, I’ve started to understand that the greatest gift afforded to me by my experience is the opportunity to share it with others so that they might be able to hear and believe that they’re not alone. During the fall of my junior year of college, I experienced a major high point when I competed on and won The Rachael Ray Show’s “Hey, Can You Cook?!” competition, trained for my first half marathon and got engaged to my college boyfriend all within the span of a couple months. I quickly fell from mountain high to valley low when just a week after getting engaged, my fiancée broke off the engagement and the relationship

I was lost, heartbroken and embarrassed. Had I been emotionally and spiritually healthy to begin with, I believe my coping mechanisms and response would have been much different than they were. But the truth is that I was already in a dangerously insecure place emotionally, and the loss of a relationship I put too much stock in was the breaking point.

Instead of focusing on the pain I was really feeling, I channeled my emotions and self-loathing onto my body. If I could make my body perfect, reach that goal weight and become more attractive, my problems would be solved. If I couldn’t control what other people did to me, I could find control in how I dealt with my body. And so began my struggle with bulimia.

Of course, being the lover of food that I am, I lacked the self-discipline to monitor what I consumed. Instead, somewhere along the road, I discovered that I could easily force myself to throw-up some of my favorite comfort foods: ice cream, chocolate, cake. Desserts in large quantities were my drug of choice.

It’s been a long time since I’ve thought about those days and it’s incredibly painful to do so. I remember sitting in my car one night, consuming an entire bag of Dove chocolates at a maddeningly quick pace, secretly knowing I wouldn’t have to keep them down for long. But the worst memory I have was how many secret helpings of my 22nd birthday cake and ice cream I had. Food that was meant to celebrate life. It made me feel dead. After graduation, I took a part-time job with Better Homes and Gardens magazine in Des Moines. I moved into my first apartment of my own, joined the gym nearby, started grocery shopping for myself (instead of relying on what was made at our sorority) and started dating a really handsome, understanding man who would later become my husband. {Our first picture together when we started dating in December of 2010.}

I would like to say that it was as simple as that. Things did improve somewhat, but my issues with food continued to persist. Up until that point, I had kept my secret to myself. It wasn’t until I shed light on my secret and opened up to Joe about what I was going through that things really started to get better. He provided a safe place for me to share my fears and struggles with food, and, more importantly, the underlying beliefs that drove my disordered eating. I held a deep-rooted fear that I wasn’t ever going to be enough for anyone, which stemmed from my parent’s divorce when I was four. And the mistaken belief that I needed to look perfect in order to be accepted by those around me, which was a direct result of not seeing myself as the Lord saw me.

Head knowledge came before heart knowledge, but slowly I began to make progress. I fed myself truth about who I am (beautiful, valued, the daughter of the most high) through God’s word, and Joe gave me the freedom to admit my stumbles along the way. It helped to have a safe place to share the thoughts I had kept to myself for so long and to shed light on something that felt so dark. When I did stumble, I held on to the knowledge that the missteps along the way didn’t define me, nor did my disordered eating. As I made progress, I started to realize how awful the binge/purge cycle made me feel – both emotionally and physically. And when I felt the temptation to eat something I shouldn’t, I rewarded myself with something else, like a walk outside, a girly movie, reading or giving myself a pedicure.

Eventually, I moved on to no longer just surviving but thriving. Food became my friend again as I started to see it as something that could do beautiful things for my health. Exercise became less about “not becoming fat” and more about training my body to do amazing things, like run long distances, hike, and lift heavy weights. And, most importantly, I started to celebrate the gift God had given me in having a healthy body. It took time, my friends, but the struggle was worth it to see the view from the other side. Sure, I still have my days. There are still times when I feel inadequate, or when my first response to an emotional situation is to eat instead of face the circumstance head-on. I still have a lot to learn about finding my identity in the Lord instead of the things of this world, but I think realizing it, and talking with others about our struggles, is a huge step toward finding lasting peace and security.