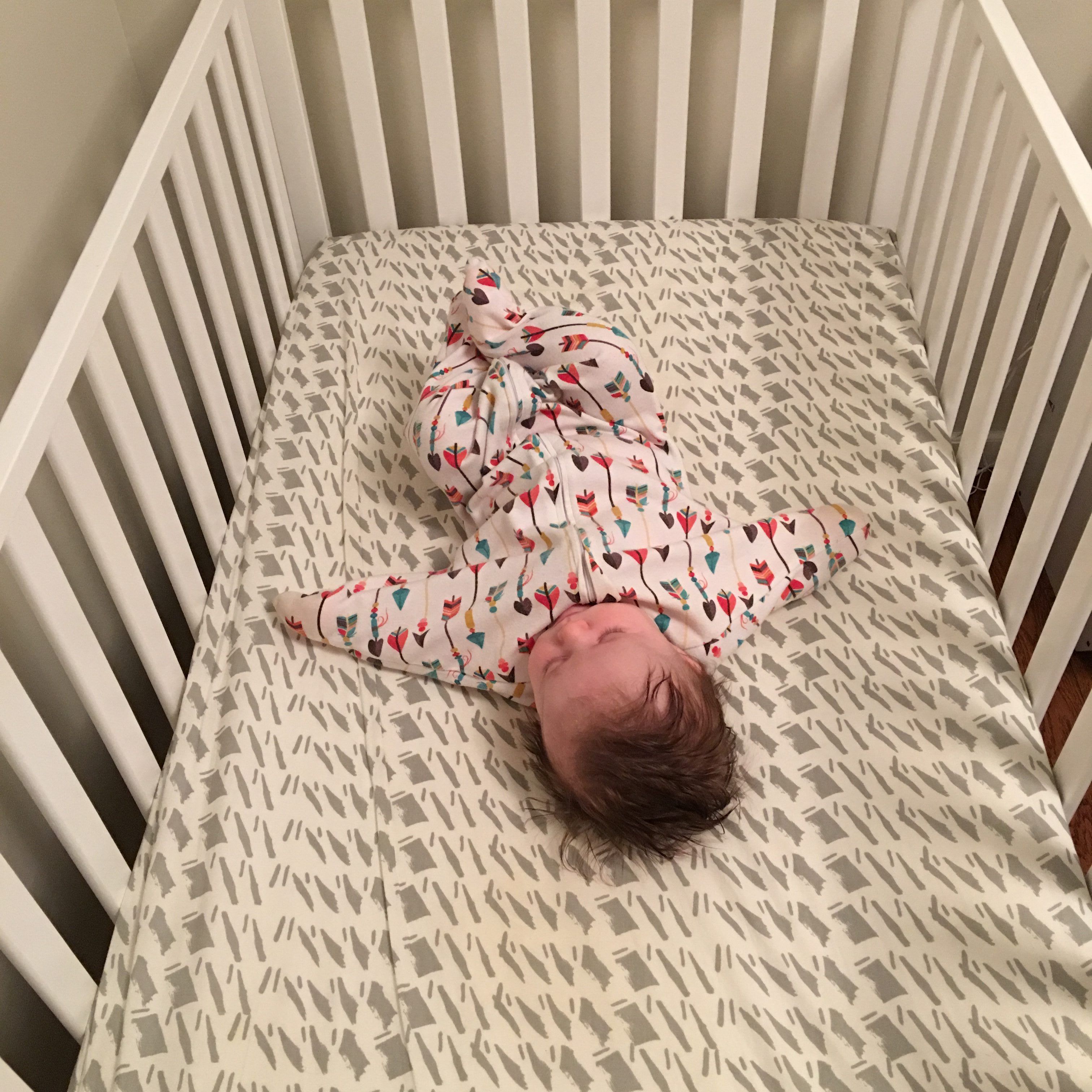 I’ve been really hesitant to talk about the topic of baby sleep, despite the large number of requests I’ve gotten on the topic, because I’m afraid the second I talk about sleep my baby will decide she hates sleeping. That’s the way these type of things usually work, right? So I’ll preface this by saying that there are plenty of aspects on baby sleep that I don’t have mastered, but both Ainsley and Collins were/are babies who loved to sleep in their cribs and they both are now really great at putting themselves to sleep. So, without further preamble, let’s talk about how to get your baby to enjoy sleeping in their crib and go down easily!

To lay the groundwork, we are big believers in Babywise. Joe and I are both “sleep sensitive” individuals, meaning that we don’t do super well with very little sleep and thrive on some degree of routine. I also believe that babies and children need good, restful sleep for optimal health and brain development. Those two factors led us to Babywise and our implementation of a schedule at an early age for both girls.

When Ainsley was little I got frustrated and discouraged by the fact that I had lots of friends who didn’t follow a schedule and had babies who were sleeping through the night much earlier than my baby. I (wrongly) assumed that if I followed the book and a schedule that I would see the results in night time and nap time sleep. But, as moms know, A + B doesn’t always equal C. For us, the greatest benefit of Babywise wasn’t that our children slept longer stretches sooner than other babies, but that implementing the strategies made for very independent sleepers who were easy to put to sleep without a lot of extra “stuff” or routines.

Crib Sleep //
With both girls, we started them off in their cribs from day 3 and day 1 respectively. I know that goes against the AAP’s new recommendation, so that’s ultimately up to your own comfort level. It only took three days for me to realize that I couldn’t sleep with Ainsley in the room with us. Every noise or grunt woke me up and I found myself interfering too quickly when she wasn’t even awake but was going through a period of less restful sleep. For new moms, I should stress that there is a difference between true crying and fussing between sleep cycles. That will different from baby to baby, so give it some time and you’ll start to learn your baby’s cries and noises.

All that to say, the crib was a familiar and comfortable place for the girls from the start. I also found it easier to get them used to their cribs when they were very sleepy newborns rather than waiting until they were older and sleep became more challenging as they “woke up” from the sleepy newborn stage. With Ainsley, I let her take more naps on my chest or in my arms, but with Collins I just didn’t have the time with a busy toddler so she took most of her naps in her crib from the start.

Our Crib Set-Up //
-Black-Out Curtains
-Crib with nothing attached to it, no mobiles, nothing to indicate the crib is a place of “play”
-Baby snugly swaddled* (we liked this swaddle and this swaddle best)
-Sound machine running (we have one of these for both our girls)
-Once we were ready to drop the swaddle, we transitioned into the Zipadee-Zip since babies can safety be in one when they are able to roll

*The most recent safe sleep recommendations say to drop the swaddle at 8 weeks due to a rolling risk; we dropped it closer to 10 weeks.

Routine // Eat, Play, Sleep
As anyone who follows Babywise knows, the routine is Eat-Play-Sleep. They recommend that you feed baby, then allow them to have their awake time (which as a very little baby, will be pretty much non existent at first) followed by sleep. This prevents baby from getting into a “eat to sleep” cycle where they need to eat in order to fall asleep. Because, if they eat to fall asleep every time, when they are older your baby may have an eat-to-sleep association that results in more frequent night wakings.

Beginning Stages of Independent Sleep // Birth – 8 Weeks
During the early days and weeks I would put the girls down to sleep awake but very drowsy in their cribs, swaddled, and then proceed to play paci-pong until they fell asleep. A paci is technically a sleep prop, but for both girls this worked well during the early days when they needed some way to soothe themselves but I didn’t want to feed or rock to sleep. Of course, there were plenty of times when the girls were little when I would end up holding them to extend a short nap or let them fall asleep on my chest or in the car seat. I’m just saying this as a general rule of thumb, aiming for at least a couple naps each day in their crib.

Around 10 weeks (8 weeks with Ainsley) we dropped the swaddle and the paci at the same time cold turkey. It made for a rough couple days with both girls, short naps and more night wakings, but it was well worth the effort in the end. We transitioned Ainsley into a Merlin’s Magic Sleep Suit after the swaddle, but that’s not approved for when they can roll, so with Collins we decided to go straight to the Zipadee-Zip and it worked like a charm. Plus, that’s one less thing to worry about transitioning out of since they can wear it until they are much older.

Cry-It-Out //
Eventually, with both girls, we did have to do small amounts of controlled crying to work through some sleep issues. It’s my personal belief that “self soothing” isn’t possible until babies are actually able to soothe themselves by intentionally bringing their hands to their mouth, moving around in their crib, etc. Others probably have different opinions on the topic, and that’s okay! To me, it just didn’t make sense to leave a small baby, swaddled and unable to do anything to “soothe” themselves, left to cry for any extended period of time.

Once Ainsley and Collins were transitioned out of the swaddle and could bring their hands to their mouth and move around in their cribs to find a comfy spot I felt more comfortable allowing them to cry in intervals of 5 to 15 minutes.

So, if I knew that baby was fed, changed, and tired, I would give them some time to work it out on their own. I would pick a time interval that felt comfortable for me, 5 minutes when they were on the younger side, and eventually longer as I got to know them and their patterns and needs more. If they were still crying after the set interval, I would go in and verbally soothe or pat baby on the tummy for 30 seconds and then leave and start the interval process again. Rinse and repeat until sleep happened. With Ainsley’s strong-willed personality it took more intervals that Collins who was an easier baby to sleep train, at least up to this point.

Night Time Sleep // Feeding Before Bed
Prior to working with a sleep consultant, our bed time routine was bath, jammies, book, bottle and bed. It was the only time of day when we fed a bottle right before sleeping. When we worked with our sleep consultant, she strongly recommended we mix up the routine so we weren’t feeding right before bed to prevent the eat to sleep association from forming.

Now (at 4 months) we aim for Collins to be awake at least 2 hours before bed time. About 30 minutes before bed time we give her the bed time bottle, followed by her bath, jammies/Zipadee, reading a book and prayers. Then we lay her down in her crib awake, kiss her on her forehead and say “Have a good night! Love you!” turn off the lights, turn on the sound machine and close the door. At this point she rarely cries at bed time but will fuss and wriggle around a bit and fall asleep.

Practice Makes Perfect //
Really, there is no magic to getting your baby to sleep easily and independently in their crib. It’s really just a matter of practice. Consistently putting baby down in their crib awake and allowing them to be comfortable with putting themselves to sleep, getting comfortable and familiar in their crib and room, etc. Like anything with kids, I’ve found it takes consistency and time.

I’m sure I’ll get some questions about WHY it matters to us that our kiddos go to sleep easily in their crib. Joe and I really want to prioritize our marriage and make sure we can still get away on date nights, weekend trips, etc. And for me, it’s much easier to leave the girls with babysitters and family if they are predictable and their sleep routine is easy for others to replicate – both for baby’s sake and for the sake of those who are caring for them. Plus, like I said earlier, restful sleep is a gift for everyone in our family when we can make it happen.

Like I said earlier, I’m not the expert on this subject. I recommend reading Babywise first, then seeking out resources like this amazing and thorough blog as well as the Babywise Moms Facebook Page for extra support!