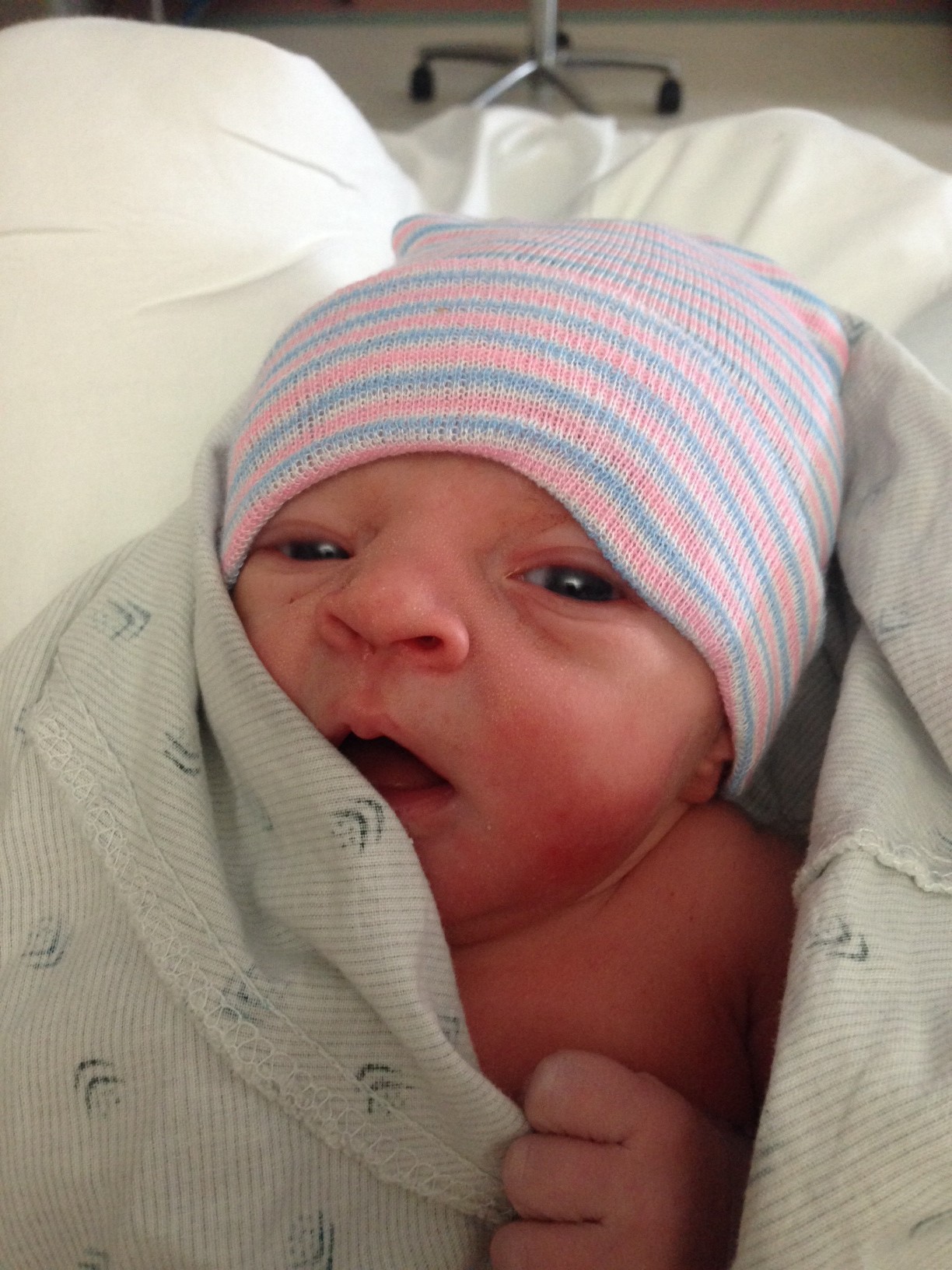 I should start by saying that I went into labor with very few expectations or ideas of how I wanted things to do. I didn’t write a birth plan, was undecided on how I felt about pain medication and was sure that I would have a very long labor since my mom had a very long labor with me. In short, my expectations of labor were low and I fully expected it to be miserable and long, and I was a little bit terrified of the whole concept in the weeks leading up to Ainsley’s birth.

On Tuesday, February 24th, I went in for my weekly doctor’s appointment with my OB to check on progress. I was just over 39 weeks pregnant and was showing great progress (3 cm and 80% effaced) so my doctor suggested stripping my membranes in hopes of moving things along. The procedure was short and slightly uncomfortable but not painful; she said we would know within 48 hours if it had any impact on inducing labor. At this point I was getting very uncomfortable being pregnant, as I’m sure is very normal for anyone that far along. Ainsley had been hanging out really low my entire pregnancy, and I was feeling that extra weight as the days ticked by.

That afternoon after work Joe suggested we go to the gym and get a good, hard workout in to move things along. I don’t know why I put lifting on the back burner for much of my pregnancy, but getting a good, hard (by pregnancy standards – I didn’t do any heavy lifting or anything that I thought would be unsafe) workout felt amazing. We did lots of squats, lunges and leg press, which I have to imagine helped things out. By the time we got home I had started to notice what I thought were minor contractions; they were short and spaced 8 to 10 minutes apart or more so I didn’t think much of them and we continued on with our plans for the night, making dinner and getting ready for one of my girlfriends to come over for a bit.

By the time my friend Kristin arrived around 8 the contractions were consistent and strong enough to prompt Joe and I to download a contraction timer on his phone to record what I was experiencing. They weren’t overly painful but they were coming 5 to 6 minutes apart and lasting for about 30 seconds. At this point I started to think that this might be the real deal, but I was so afraid of going to the hospital in the middle of the night only to be sent home with false labor that I wanted to hold off as long as possible.

At 9:15 Joe and I were watching a recorded episode of Downton Abbey and the contractions were starting to last much longer, around a minute in length. They were still bearable but left me feeling like a trip to the hospital was inevitable. Since I was convinced, as I mentioned, that my labor was going to be 36 hours long, I became increasingly worried about Joe getting a good night of sleep. (What?!) I didn’t want him sleep-deprived for 48 hours so I suggested he go to the guest bedroom and sleep while I labored at home for as long as I could. I told him my goal was to make it until 3:15 before going to the hospital so he could get a solid 6 hours of sleep. Looking back, I think I might be the nicest in-labor wife ever? Or maybe just a little delusional.

I attempted to sleep on the couch in between contractions to preserve as much energy as possible, but after about 2 hours it proved to be quite impossible to sleep. My contractions were now anywhere between 50 seconds and 1 minute and 20 seconds in length and coming about 4 to 5 minutes apart. I’ll admit that I was totally unprepared for just how painful and consuming contractions would be and was quickly becoming eager to get to the hospital for an epidural, no longer undecided about wanting pain medication. I walked around the house, leaned over the couch, rolled from side to side, willing to try anything to get through each contraction and make it to my 3:15 goal.

When 3:15 finally arrived my contractions were still lasting around a minute or more and coming 3 minutes apart. I woke Joe up and informed him that we needed to get ready and go to the hospital NOW because the pain was quickly becoming unbearable. Somehow, during all of this, I was still worried that this was false labor. I remember being on my hands and knees in pain during a contraction and saying to Joe, “If this is false labor, I don’t even want to know what real labor is like!” Along with, “Give me ALL the pain medicine!” It should also be noted that I had some pretty grand ideas about showering and blow-drying my hair when labor began so I could look cute, put-together and fresh, but of course I spent so much time thinking that it was false labor that by the time I knew it was real labor the idea of getting in the shower and doing my hair was an impossible task. We arrived at the hospital around 3:45 and when they checked my cervix I was dilated to a 6 and 100% effaced. I was so thankful that I had progressed that much and wouldn’t be sent home but would instead be admitted to have our baby! All attempts at walking from the assessment room to our labor and delivery room were quite difficult and I found myself on my hands and knees between each contraction.

When I got into the hospital bed I immediately ordered the epidural, totally decided at this point that I needed something to help get me through the hours to come. We were informed by the nurses on duty that the anesthesiologist who was on call that morning was the most-requested doctor in the hospital for giving epidurals, and boy can I see why! I don’t have any other experiences to compare it to, but I think I had a pretty great experience. My epidural was amazing; I could feel my feed and move my legs slightly, but I didn’t feel a single contraction. Joe brought his own pillow and blanket (thank you to the person who suggested doing so!) and we both drifted off into sleep for a solid two hours from 6 to 8 am.

The greatest gift of the entire labor and delivery process was the fact that my doctor was assigned to my hospital that day to handle labor and delivery needs and had no other patients in active labor. As you can imagine, we’ve grown quite fond of our doctor since she has been down this crazy road with us over the last 2 years and having her deliver our baby felt so special. She was around so much more than I expected, checking on us frequently, talking with us for extended periods of time and putting me at total ease. She was even around for over an hour of the time we spent pushing, chatting with us between each contraction. Around 10 am she checked me and I was fully dilated and Ainsley had dropped even lower, around a +2 station. We were officially ready to push!

Although Ainsley was low and ready to come into the world, I felt like it took me a bit of time to get the hang of pushing. Once again, my epidural blew me away because I was still able to feel the urge to push but didn’t feel any of the pain associated with each contraction. Joe was such a huge support, holding on to one of my legs while our amazing nurse held on to the other. Some people have asked how Joe did during labor, and quite honestly he was a total champ. Having grown up on the farm, he’s helped with plenty of animal births, and although I don’t like the idea of human birth being compared to birthing a baby calf, there really are a lot of similarities! Thankfully the ins and outs of labor didn’t phase him one bit; in fact at one point Joe was holding both my legs and counting for me while I pushed when the nurse was busy hanging another bag of IV fluids and our doctor was out of the room.

I pushed for 2 hours total; about an hour in I secretly started to wonder if we were making any progress and if Ainsley would ever arrive, but the encouragement of our nurse, Joe and our doctor helped keep me focused and prevented me from becoming discouraged. It was, without a doubt, a physically exhausting process pushing for that long. I was so thankful that we had the opportunity to nap earlier that morning and that I was relatively well-rested and had conserved energy for this part of the delivery process. About 20 minutes before Ainsley was born my doctor suggested doing an episiotomy. She said that it would help prevent a tear that looked like it would be much worse and would get Ainsley here a little quicker. At that point, 1 hour and 40 minutes of pushing in, I was in compete support of her suggestion. Anything to move the process along was good in my book!

About 20 minutes later our little peanut came into the world, crying the most beautiful, loud and forceful cry I could have hoped for. The first thing I noticed was her full head of dark hair and how beautiful her little body was. I still have that image of the first time I saw her burned on my mind; it’s something I hope I never forget. All through this pregnancy I have battled fear and doubt and worried about her health and well-being. Seeing our healthy little girl laying on my chest, so perfect and healthy and wide-eyed left me completely in awe of our creator and the miracle of life and of His provision for our little family of three.

We kept Ainsley on my chest for about 30 minutes after she was born. Joe cut the cord and I marveled at that 2-vessel cord that had caused us so much fear and concern throughout the pregnancy, monitoring her every few weeks and checking on her growth and development. After about 30 minutes I was ready to have her cleaned off, she was weighed and measured and promptly returned to us to cuddle. We marveled at her in the way that only new parents can marvel at their baby, looking at her face for signs of Joe’s features and my own. I was so thankful they waited to put the antibiotic ointment in her eyes because the first hour she was awake, wide-eyed and checking out the world, was so special.

And that’s it! Her birth was so uneventful and beautiful that I found myself nostalgic for labor yesterday as we celebrated her 1-week birthday. That’s certainly not something I ever thought I would say, but the process was so pleasant, beautiful and miraculous that I can’t help but want to do it all over again!

Welcome to the world, Ainsley Moriah! We’re so thankful God chose us to be your parents.